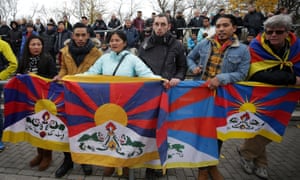 A tour of Germany by China’s under-20 men’s football team has been suspended after their first match was met with protests.

The remaining games in Germany will be postponed, the German Football Association said, after a group of protesters unfurled Tibetan flags causing the Chinese team to walk off the pitch. The association has not given a date for the rescheduled games.

“We believe this adjournment is essential in order to give us the time needed to discuss the situation calmly and openly and find a reasonable solution,” said Ronny Zimmermann, vice-president of the German association. “The two federations will try to work out a way of relaunching the project again quickly.

China invaded Tibet in 1950 and international rights groups regularly condemnChinese government policies in the region, including restrictions on speech and religion. Displays of the Tibetan snow lion flag are strictly prohibited in China.

The Chinese team was set to play in Frankfurt on Saturday before the announcement and was originally scheduled to play a total of 16 matches through May 2018. The team lost its first match 3-0 to TSV Schott Mainz in front of about 400 fans, but the game was interrupted at one point for 25 minutes when the Chinese team refused to continue after a group of six spectators unfurled Tibetan flags.

The group, four Tibetan refugees and two Germans, was from the Tibet-Initiative Germany group and the players only returned after they agreed to remove the flags. The match was being broadcast live in China.

When you play in Germany you have to deal with the fact that anyone can express their opinion.

“We cannot ban the protests, there is the right to freedom of expression here and certain rules apply,” said Zimmermann. ”However, we also want to be good hosts and as a result we are not happy with this incident.”

Three German teams refused to play China after the protest, with the other clubs reportedly being paid €15,000 (£13,400) to participate.

Reinhard Grindel, president of the German Football Association, defended the right to free expression and said in response: “It has been made clear to the Chinese federation that when you play in Germany you also have to deal with the fact that anyone can express their opinion.”