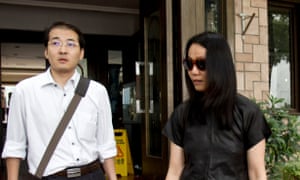 Human rights groups have accused Beijing of ramping up its assault on civil rights activists after a respected lawyer was jailed for 12 years on what they claim were trumped-up charges.

Xia Lin, a 46-year-old lawyer whose clients have included dissident artist Ai Weiwei and free speech champion Pu Zhiqiang, was detained in November 2014 and put on trial for fraud in July.

Activists and members of China’s legal community expressed perplexity and outrage as they learned the severity of the sentence.

The Chinese Human Rights Defenders group described the sentence as “severe retaliation against a human rights advocate who defended the rule of law”.

Ding, Xia’s lawyer, said he was “very disappointed” by the sentence and said his client would appeal.

He said Xia believed he was being punished for representing Guo Yushan, a prominent activist who was detained in 2014 after voicing support for pro-democracy street protests that were sweeping Hong Kong.

“He thinks they are taking revenge on him for getting involved once in the Hong Kong [case]… and some other human rights cases,” Ding said, describing the sentence as unfair.

He said Xia’s supporters were convinced his imprisonment was part of an ongoing attempt by the Communist party to silence dissent. He noted that the lawyer was known as a moderate member of China’s once vibrant community of human rights lawyers. “It’s really obvious that it seems to be politically motivated.”

“We can only see a very grim future for lawyers in China who work on human rights cases,” Poon added. “It [underlines] the current regime’s attitude to human rights activists … It suggests that Xi Jinping’s regime [has decided to take] a very heavy hand towards lawyers.”

We can only see a very grim future for lawyers in China who work on human rights cases.

Maya Wang, a Hong Kong-based activist for Human Rights Watch, said: “The harsh sentence against Xia Lin sends the sternest warning yet to the community of human rights lawyers, who has been under a sustained crackdown in the past year.

President Xi has made clear that the law is “a knife held firmly in the hands of the party; Xia Lin appears to be one of its latest victims.”

Diplomats and long-term China watchers say they have been shocked by Beijing’s growing intolerance of dissent.

After Xi Jinping took power in 2012, police launched a severe crackdown on civil society and human rights lawyers, arresting and jailing a succession of lawyers and activists.

Earlier this summer a series of show trials were held in the northern city of Tianjin at which defendants were paraded before the cameras to admit they had been attempting to foment a “colour revolution” in China.

Many describe the current attack on free speech as the worst since the period following the 1989 Tiananmen crackdown.